This post is sponsored by Save A Lot. All opinions are my own.

Whether you are hosting a holiday breakfast or brunch or you just have so many things going on this week mornings will be hectic, this cinnamon roll breakfast bake will save the day.

Combining refrigerated cinnamon rolls from Save A Lot with the main mixture for french toast delivers an easy and flavorful breakfast dish that is sure to be a family favorite!

This post may contain Amazon and other affiliate links. By using these links a small commission may be earned at no additional cost to you.

I was able to pop into my neighborhood Save A Lot and grab everything I needed for this breakfast bake. Their quality ingredients are backed by a 30-day money-back guarantee and for me, it’s so convenient to get in and out with everything I need quickly and friendly to my budget!

Can I make this Cinnamon Roll French Toast Casserole ahead of time?

Yes! It is one of the reasons I make this so often! Follow all recipe directions up to the baking. Instead, cover your casserole dish with plastic wrap and refrigerate up to 24 hours. Remove from the refrigerator half an hour before you plan to bake and then follow recipe baking instructions.

This breakfast casserole is great to make on holiday mornings like Christmas and Easter when you want to be with your family versus in the kitchen making breakfast!

With as quickly as you grabbed the ingredients from Save A Lot, you can have this breakfast dish on your table while you make memories with your family!

I also love to make this dish on Sunday and then bake Monday morning and we can enjoy all week long. It has also been a hit at pot lucks and brunch get-togethers! Save A Lot’s great prices means that we can enjoy delicious meals without going over our grocery budget for the week!

Store any leftovers in an airtight container in the refrigerator for up to a week.

To reheat the entire casserole dish, I recommend 20-30 minutes in a 350-degree oven.

To reheat single pieces, I do this easily in the microwave in 30-second increments. Be careful, it goes from cool to very hot quickly!

How to Make this Easy Breakfast Bake

Preheat oven. Melt butter in the microwave and spread evenly over the bottom of your casserole dish.

Pour maple syrup over the mixture and bake for 35-40 minutes at 350 degrees.

Drizzle the icing that came with the cinnamon rolls over the top of the warm casserole, slice and enjoy!

Sign up for my recipe emails and they will be sent straight to your inbox for free…that’s how I roll! 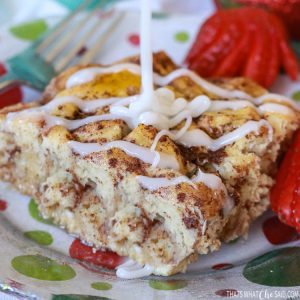 You can easily make this ahead of time.  Follow steps and when it gets to the baking step, simply cover the casserole and store in the refrigerator up to 1 day.  Remove from refrigerator and bake as normal.

Serving: 1pieceCalories: 281kcalCarbohydrates: 41gProtein: 3gFat: 12gSaturated Fat: 6gCholesterol: 8mgSodium: 467mgPotassium: 57mgFiber: 1gSugar: 22gVitamin A: 91IUCalcium: 39mgIron: 1mg
Tried this recipe?Let us know how it was!
All images & content are copyright protected. Please do not use my images without prior permission. If you want to republish this recipe, please re-write the recipe in your own words, or link back to this post for the recipe.
Nutrition information is provided as reference values only.
That’s What Che Said®