Yes, I want in!
Home » Blog » Recipes » Cocktails » Apple Cinnamon Sangria Recipe
Apples, Cinnamon, Ginger notes floating on top of your favorite red wine, topped with Ginger Ale to make the most delicious fall sparkling sangria recipe that will be perfect for any hayride or bonfire!
Jump to Recipe Print Recipe

It’s Fall Y’all! I can’t really pull off that saying! What I can pull off is another awesome sangria recipe!  This Apple Cinnamon Sangria recipe is screaming to be your new fall cocktail!  Perfect for hayrides, bonfires, cozying up to movies and perfect for your fall parties!

Apple paired with good red wine and subtle (or strong!) hints of cinnamon floating amidst spiced rum and ginger ale is the perfect beverage for your fall.  Yep, the WHOLE fall. and maybe even into the winter!

I started by chopping up 1 red apple, 1 yellow apple, and 1 pear.  I prefer to cut them into small bite-size pieces so that when I am drinking the sangria they are small enough to float in your mouth and eat!   I also leave a few slices for garnish!

Now for the Cinnamon, add in your Fireball!  I started with about 1.5 ounces and after you sip you get the cinnamon aftertaste.  I heart cinnamon so I went and added 1.5 more ounces to make 3 total ounces.

I suggest starting small tasting and adding if necessary.   You can’t take it out!   I recommend letting the liquor and fruit chill together in the fridge for an hour and then adding the Ginger Ale right before you are ready to serve.

You can also omit the ginger ale so that it’s not a sparkling sangria but I really think it makes it refreshing and the ginger with the spices of fall is just a wonderful marriage.  I would marry this drink. 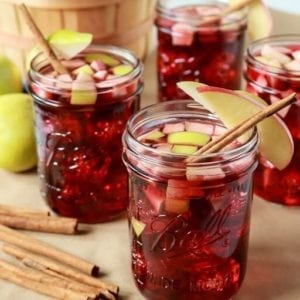 Calories: 1903kcalCarbohydrates: 146gProtein: 1gFat: 1gSaturated Fat: 1gSodium: 116mgPotassium: 1296mgFiber: 1gSugar: 125gVitamin C: 3mgCalcium: 117mgIron: 6mg
Tried this recipe?Let us know how it was!
All images & content are copyright protected. Please do not use my images without prior permission. If you want to republish this recipe, please re-write the recipe in your own words, or link back to this post for the recipe.
Nutrition information is provided as reference values only.
That’s What Che Said®