I hope you’ll read on to find out how to create your very own *magic* DIY bug and monster spray!

“A spray a day keeps the monsters and bugs away!”

Why had I not thought of this sooner?!?  All that spider/Halloween/Ghost/Haunted House talk lately has Michael not wanting to go into our basement by himself.  Seriously!  He doesn’t like spiders in real life and of course there was one in our basement…alive…crawling no where NEAR the general direction of his toys.  Then the same night he walked past the open door of my craft room and was spooked by the container of Glow in the Dark Mod Podge that I used for my Haunted House Canvas.  I had not put it away yet and it was left to “Glow” on my craft table.  After that, he was SURE there was a monster in my craft room!

The problem with both of these incidents is that the playroom (and their bagillion toys) is in the basement (where there are 1 million spiders in his mind) and my craft room is RIGHT OUTSIDE the boys playroom (where monsters live)!  So now because of spiders and monsters…he won’t play down there alone.

I NEED THEM TO PLAY DOWN THERE ALONE SOMETIMES! I had to think of something. 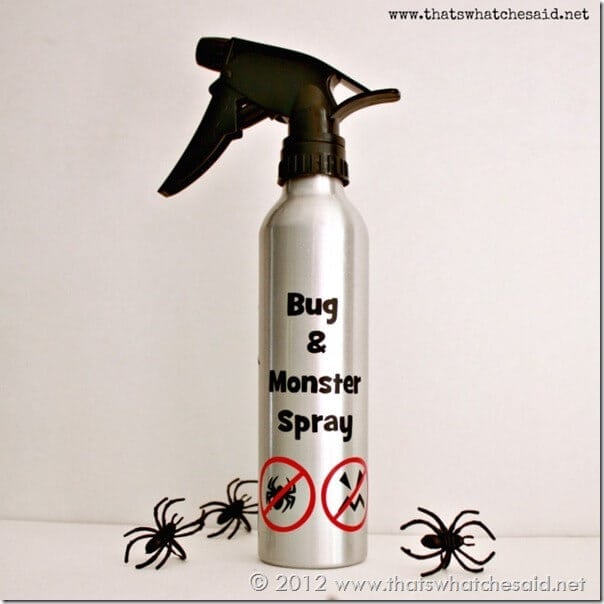 I made mine using my Silhouette but you can still do this without one!  You can certainly use scrapbooking stickers too!  Just like I made my Detergent Jar.  Just be sure to choose stickers with clear backing.  Stick-abilities offers a great selection and those can be found almost anywhere!  The ones I used for the white Halloween Soaps would work great also!

I cut out these little phrases and spiders, and webs out of black and red vinyl.  Then I applied to the metal spray bottle.

Lahhhhhhh….do you hear the angels singing?  He will now venture into the basement to play with his toys…ALONE…well armed with his spray!  I just filled it with water so it won’t hurt a thing!

Here is the front and the back: 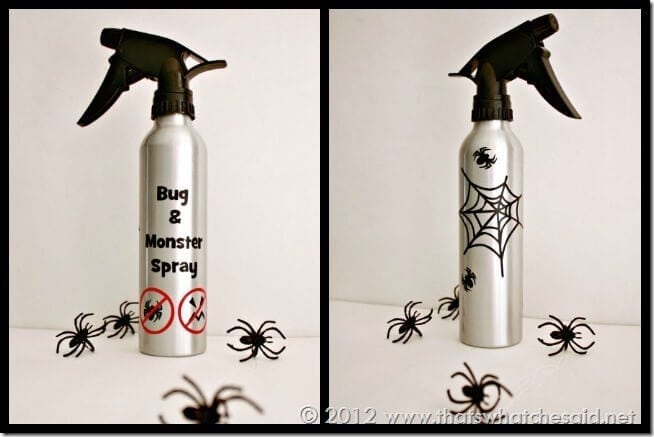 “Repels against bugs and monsters!”  “Bugs and Monsters don’t stand a chance against this spray!”  {Say those above lines in your best TV Infomercial Guy Voice!} 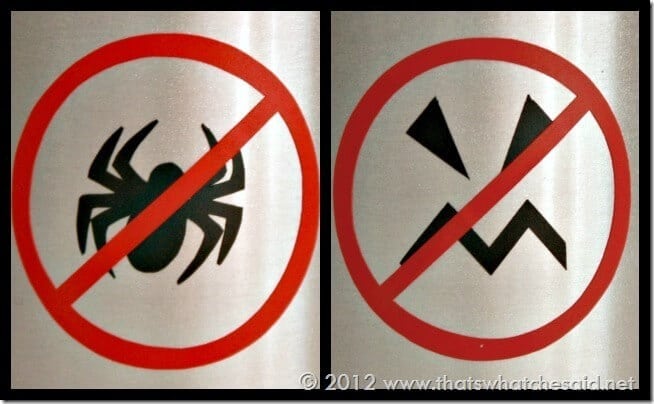 Another day done saving the world…or at at least my sanity :)  Do your kids have any quirks or qualms that MUST FIX SO THAT LIFE GOES ON?

Disclosure: I recieved free product however all opinions are 100% my own. I was not paid for this tutorial.