Cheer on your favorite team with these painted NFL Serving Dishes!  You can customize to your team and mascot using my same directions below!  Perfect for chips and dip or a delicious dessert plate!

Are you a football fan???  We are Minnesota Vikings fans here in this house and even though they lost against the Packers Saturday night we still love them!  When the Vikings played the St. Louis Rams here in St. Louis, Fred and I went to the game with my brother, his girlfriend and his girlfriend’s family!  (She gets extra points for being a Vikings fan!)  My brother is a Rams fan…but we let him come anyway!  :) 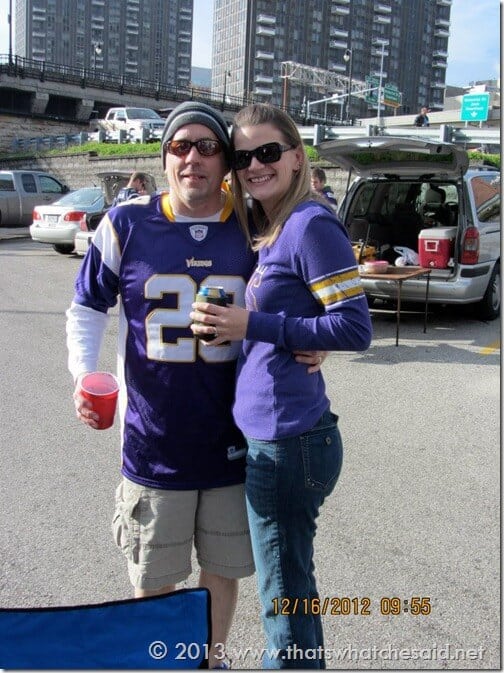 Did you know I had a little brother?!?  Well I do.  He’s pretty awesome and I think his girlfriend is pretty awesome too!  However from this photo you might not call him little  Maybe I should say younger!!  (I used to feel tall at 5’10”…these two make me feel so stinking short!) 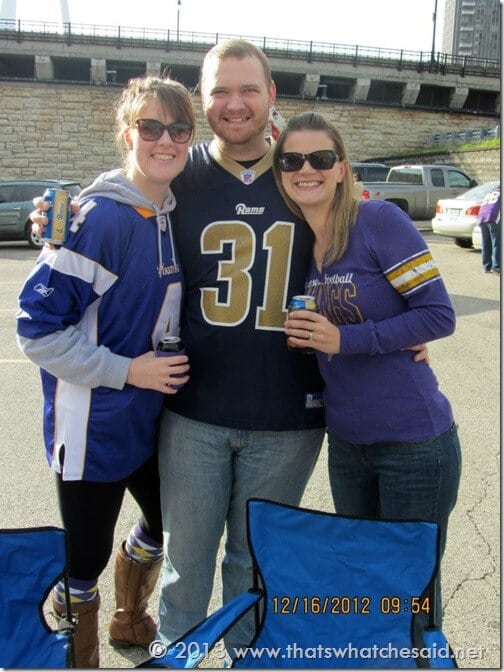 Even if you are not a football fan normally…most become one when it comes time for the Super Bowl!  I made this plate with the Vikings on it because they are our team but you can certainly make it with YOUR favorite team or to coincide with the teams in the bowl!  (Or you can just use this tutorial to make anything your little heart desires!) 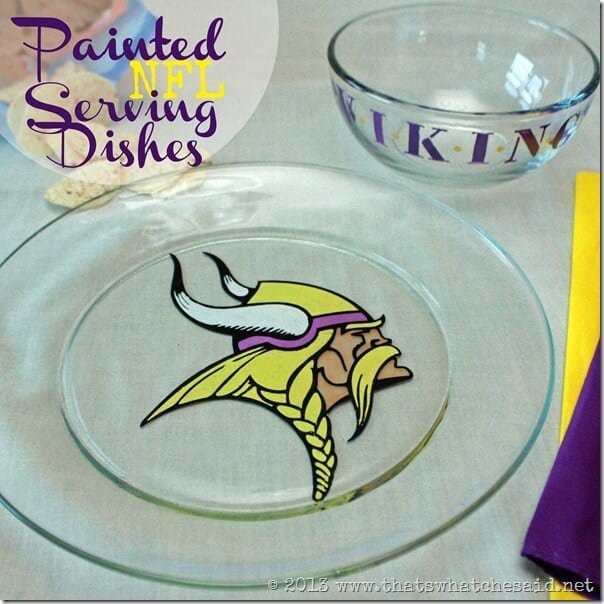 I started out by finding a free .svg file of the Vikings Logo and opened it in my Silhouette Designers Edition Software.  I sized it appropriately for the plate and then flipped the image horizontally (mirroring it) because I am going to apply the image to the BACK of the plate so that the paint des not come in contact with the food on the plate.  (Here is it mirrored—Victor normally faces to the right) 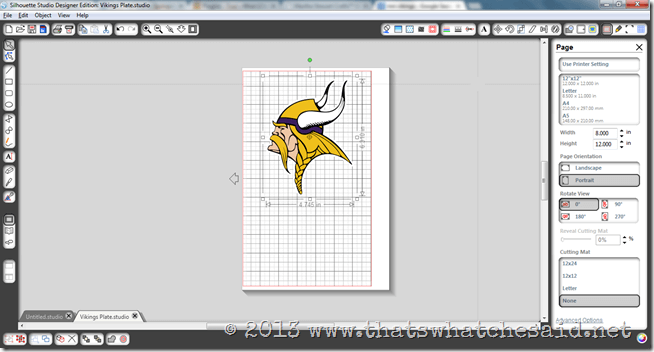 I then set the cut lines to do inside and outside cuts. 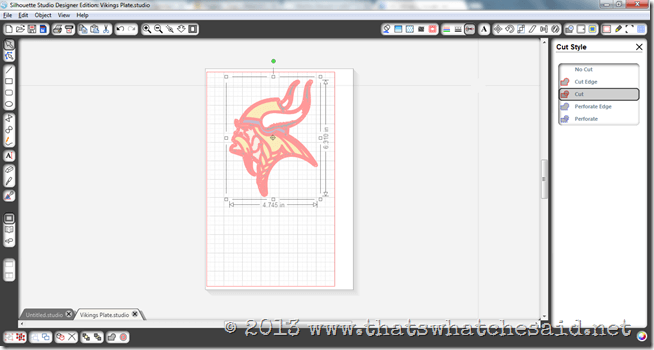 I cut the file on a scrap piece of vinyl and then weeded (removed) the outside border of the image.  I will fill this in with black paint to outline the logo.  I used transfer paper to apply it to the back side of the plate. 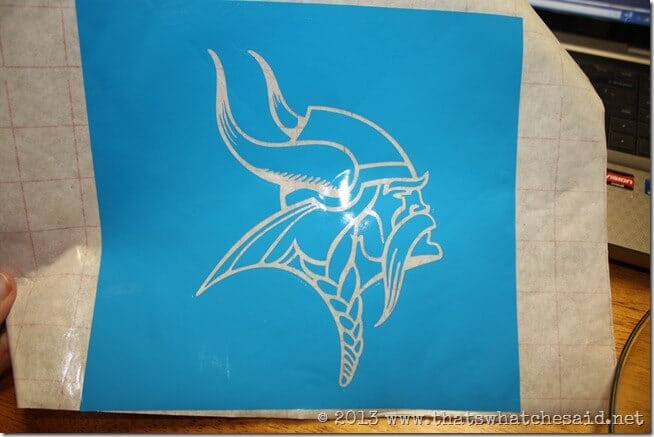 I used the small squeegee to spread the black glass paint over the open area in the stencil.  I used the squeegee over the sponge because the squeegee helps get a more solid coverage and the foam daubers leave too many air bubbles.  Any area that wasn’t’ filled, I used the bent end pick to fill move the paint around to fill in completely.  I let dry and then removed the vinyl from the plate.  I was left with this awesome outline of Victor the Viking! 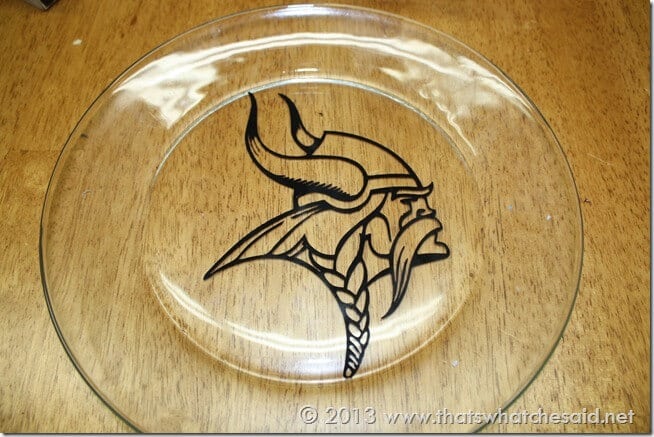 Up at the top of the horn area, the paint kind of blurred together so I used the small glass scraper to scrap the excess paint from the plate to clean it up.

Next I carefully filled in the open areas with the appropriate colors.  I mostly used the bent end pick to do this job.  You can use the bent curved side to push the paint around and then you can use the point to fill in small areas.   the only exception was for the face.  I wanted a flesh color so I used a translucent orange MS paint and then used the small dauber to just lightly add some orange to give the flesh color.  I let that dry and then I was left with this awesome plate! 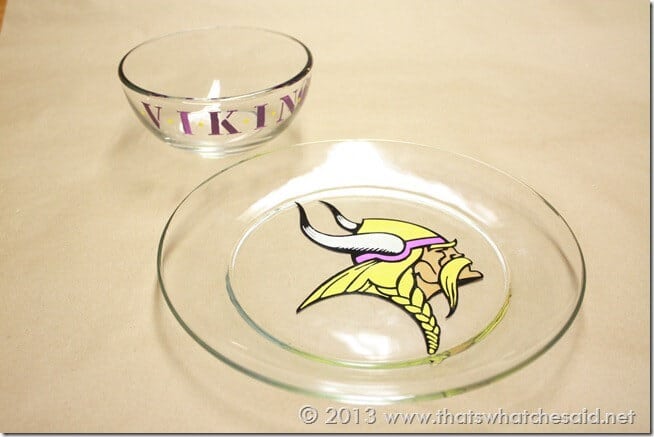 For the bowl, I simply used the letter stencils and the small squeegee/bent pic duo to spell the word VIKINGS.  Then I used the pointed tip of the paint bottle to apply small yellow dots in between the letters. 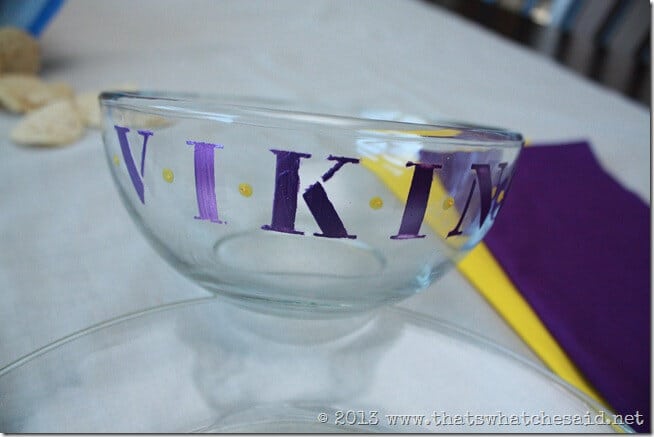 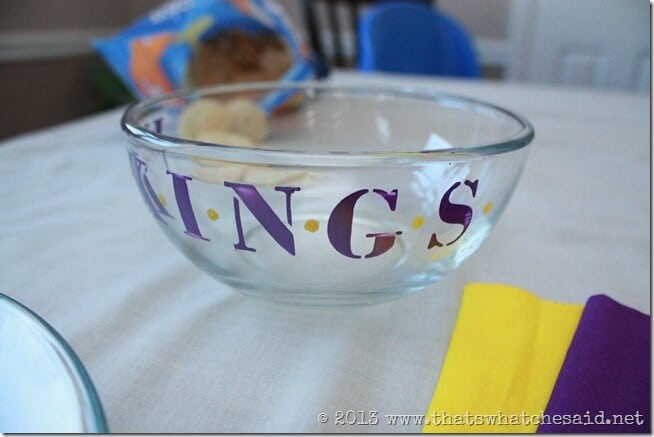