Thanksgiving seems to be the forgotten holiday.  We enjoy everything Halloween and push right on to Christmas.  I mean, they were putting out Christmas stuff at Hobby Lobby in JULY!  Yes, like when it was 2 degrees shy of the face of the sun here, they were decking the halls with boughs of holly.  CRAZY.  Today I am sharing my Thankful Jar Craft. 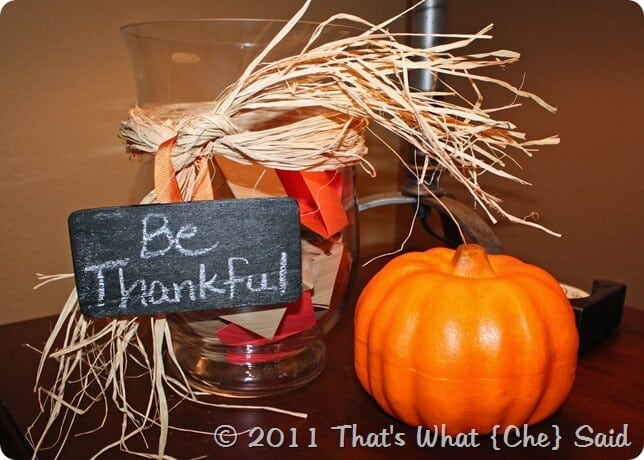 I LOVE Christmas time but I also want to enjoy Thanksgiving and be Thankful!  Michael is learning all about seasons and the holidays that go along with them so we took some time today to make a “Be Thankful Jar” and talk about Thanksgiving.  Side note:  He thinks “Thanksgiving” is a time frame, as in the month of November.  “Mom, it’s already Thanksgiving, duh, it’s November!”  He cracks me up! 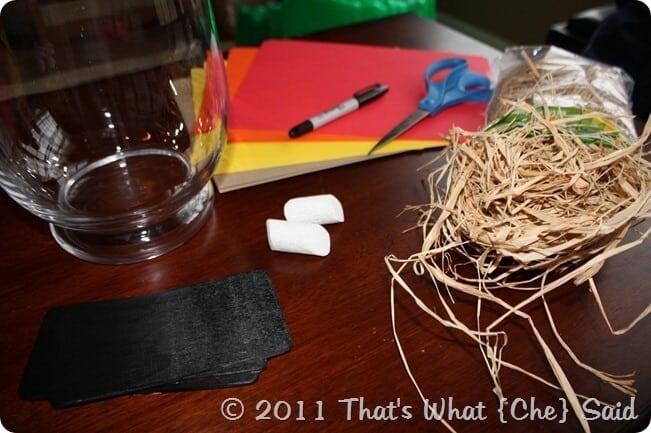 First I took a large glass vase/hurricane that I had used for the candy bar at our wedding reception.  Next took some raffia and tied it around the jar.  We painted some small plaques from Michaels ($0.49 each) with chalkboard paint. 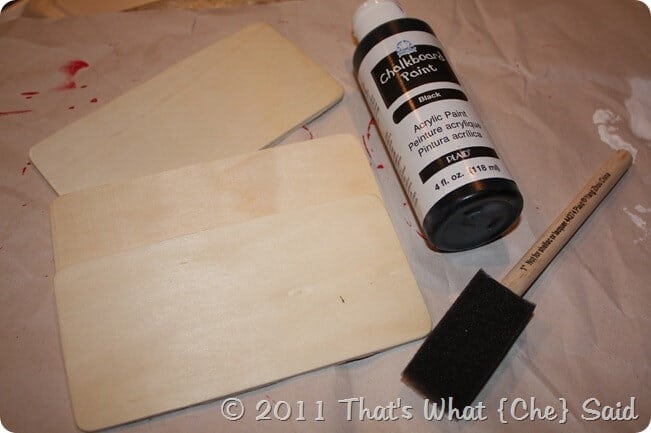 After they were dry I let Michael “prime” them with a full coat of chalk per the directions. We wiped them clean afterwards with a rag. I wasn’t sure how I would use them so we ended up only using 1 of the 3 we originally painted. 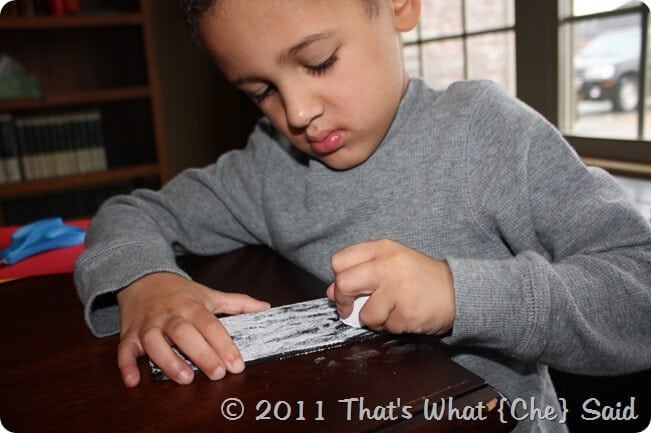 Next I looped the chalkboard plaque through the raffia knot using some orange ribbon and hot glue.  We wrote “Be Thankful” on our plaque. 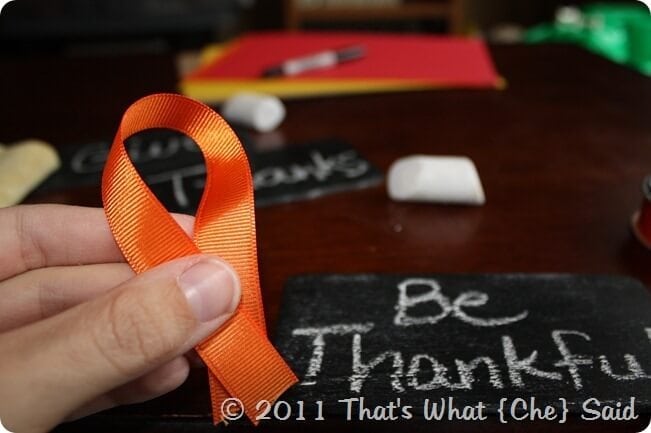 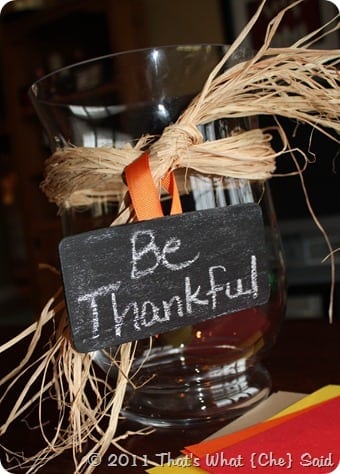 I cut some fall colored card stock into small rectangles.  Each member of our family has a color. 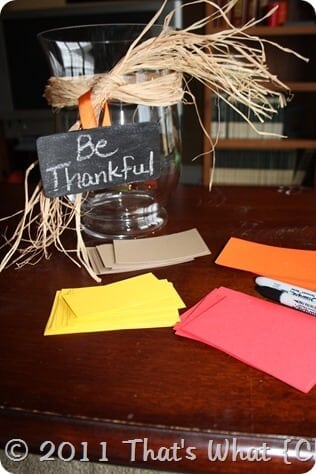 We wrote some things we were thankful for right away. Michael’s are great! He thought of these all on his own!!! 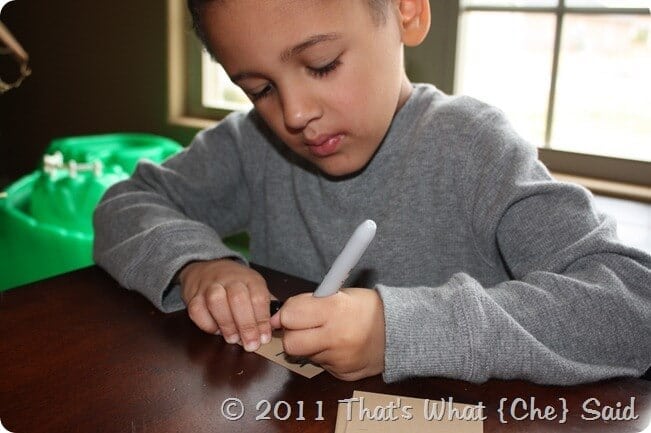 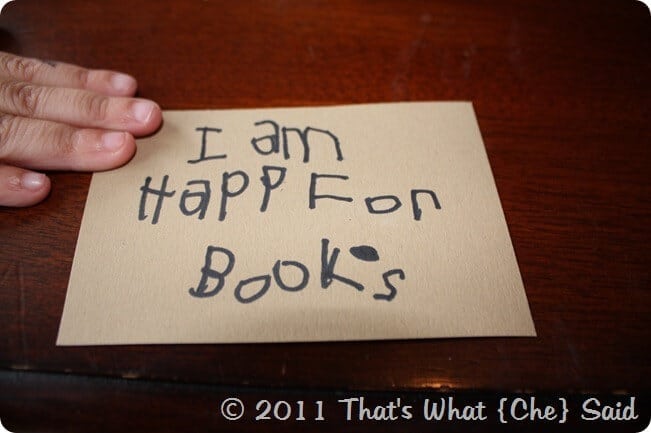 “I am Happy For Books” 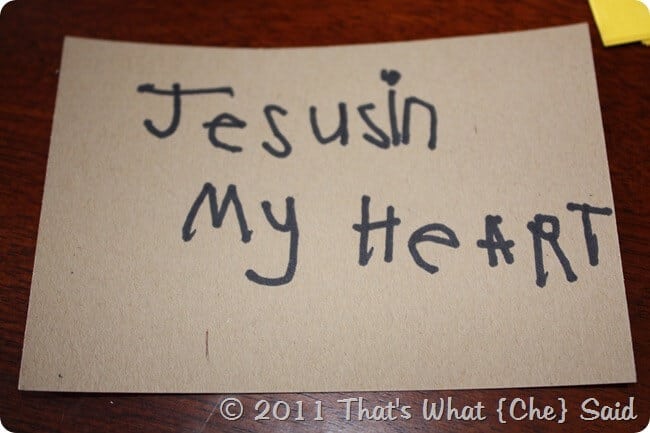 “Jesus in my heart”  That Catholic Preschool is paying off

We added a few for Ryan such as, balls, balloons, walks and “Elmo’s Peek-a-boo book”  (all thought of by Michael) and then Daddy wrote down some of his own also.  We folded them up and dropped them in, with plenty of empty cards to still be filled through out the month. 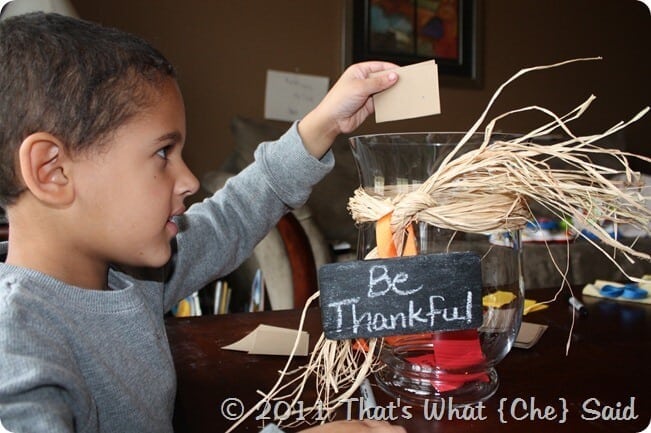 We will read these on Thanksgiving!  It was nice to see Michael really thinking about what he was thankful for.  Later in the day, he’d run off to write something else that popped in his mind.  He has really been choosing things that are meaningful also, not just every toy he owns!  That is nice to see! 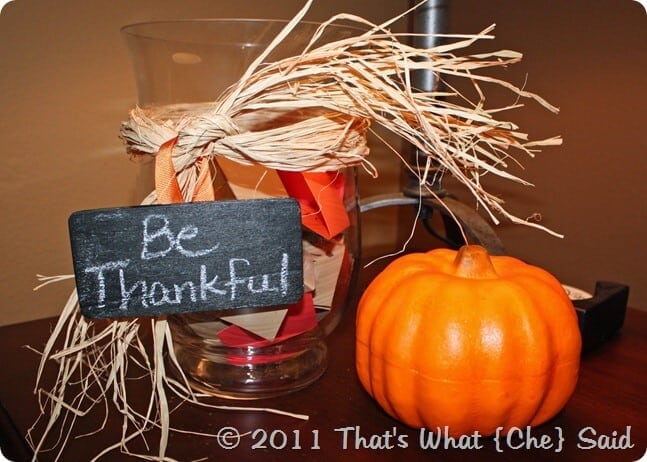 So Be Thankful!  Take time to enjoy Thanksgiving during the mad dash to Christmas!  November is a great time, let’s not just pass it over!