Michael had his first Tee-Ball game last night and OH MY GAWD…I DIDN’T HAVE THE SD CARD IN THE CAMERA! What in the hell was I thinking? Get your shit together MOM! So I improvised and took a few pictures with my not-so-stellar camera on my BlackBerry. Those pictures will do for now, until next game, when I bring not only the SD card in the camera but 3 more as spares and crack out the big guns with the 250mm zoom lens! 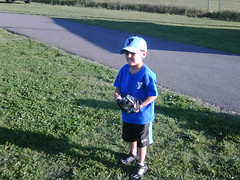 The kids are so stinkin’ cute it makes me all warm and fuzzy! They, first off, have no idea what the hell they are doing. They are all sporting tee shirts and ball caps that are two sizes too big for them, they run the wrong direction, pick up the ball when they are a base runner and hand it over to the opposing team, totally skip second base and head straight for third, and about 2 out of every 3 hitters, almost nail the coach standing behind them right in the junk! It’s a dangerous job coaching pee wee tee ball! 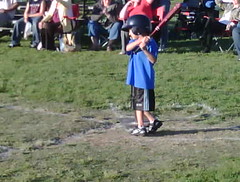 Michael’s team had only one practice before last night’s game and it was cut short due to some nasty weather.  It didn’t matter though, Michael did great!  He was all decked out in his blue YMCA shirt and ball cap!  He hit the ball, ran the bases and even fielded a bit when he was in the pitcher position.  (The kids rarely hit it past the pitcher position)  Freddy helped out at third base and when Micheal was standing nearby he would yell over to the baseline where Ryan and I sat to say hello to Ryan and tell me to “Put Ryan down and let him crawl over here!”  So cute.  Ryan was Michael’s biggest fan!  Ryan clapped and cheered and about jumped out of my arms when he landed sight on his big brother!

At the end of the game the two teams shook hands.  Absolutely the cutest thing ever…if they missed a hand they would stop suddenly to try again to connect and all the kids following in line would bonk into the person in front of them and pile up.   One kid, who was in the front of the line, ran to the back so he could shake hands again for a second time! 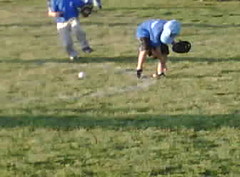 Freddy & I were so relieved that this attempt at group sports boasted much better results than our previous attempt at pee wee soccer up in MN last year.  (It was middle of May, 33 degrees, freezing rain, 25 mph winds.  Michael wanted NOTHING to do with anything soccer and told me “I just want to go home and eat popcorn!”  We tried one more game with no luck of any interest what so ever and never went back)  Freddy’s daughter had some issues with participating in group activities so Freddy was worried that was Michael’s fate also.   Michael proved his daddy wrong again and did fantastic!

I am almost certain that Michael’s favorite part of the whole game was the snack the coach brought for after they were finished.  That’s okay though, because Freddy and I enjoyed every minute of watching him be a little boy! 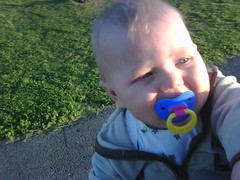